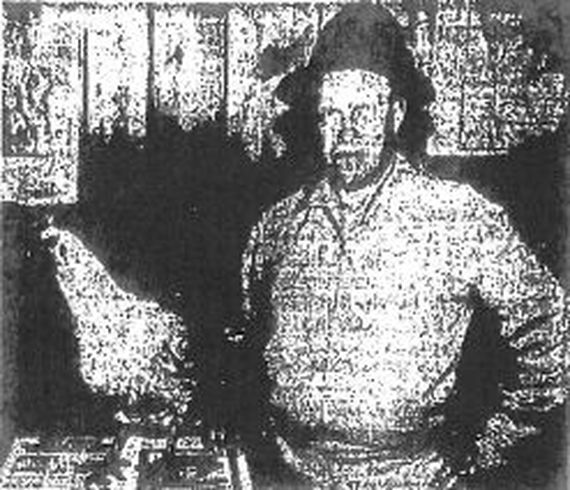 Strawberry Point – A new breed of chicken is being offered this spring by W. C. Fenton, Strawberry Point hatcheryman.  Fenton has chosen to name the breed “Iowa Blue” because of its distinctive coloring and also to give the state of Iowa a chicken of its own.

The feathers are basically white with a bluish-grey marking that resemble the markings of a pheasant hen.  Generally the birds’ heads show more of the white while the feathers toward the tail bear more dark markings.

The breed is the result of a program of breeding reportedly begun by John Logsdon of Decorah twenty-five years ago.

Logsdon says he mated a cock Chinese pheasant with a Black Minorca hen and a Rhode Island hen.  He raised only eight birds from those matings – four pullets and four roosters.  The next year he mated what he regarded as the best rooster with the four hens and continued in that manner, always keeping the roosters as long as possible and mating them with the previous year’s pullets.

Logsden says he picked the Black Minorca to start because that breed lays larger eggs and the Rhode Island Red because it was, in his opinion, the leading breed of its type.  The cock pheasant was chosen because of its hardiness and ability to stand both cold and heat.

Fenton purchased Logsdon’s flock last February of last year.  Fenton now has three flocks in addition to the one at Strawberry Point.  These flocks will furnish eggs for this year’s hatch.

Characteristics of the Iowa Blue include an extra large breast, dark legs, a brown egg and extra hardiness and resistance in disease.  The baby chicks when first hatched are varied in color from red or brown to grey or dark blue or smoky blue, but when they feather out they are all alike.

Fenton reports that Leghorn hens mated to Iowa Blue males produce a pullet that will lay a large white egg.  He also will hatch some such crosses as well as some Iowa Blue-White Rock crosses.

While the breed is still so new that egg production records are necessarily few, Fenton says that his four flocks have demonstrated during the fall and winter that their production will compare favorably with that of other heavy breeds.