How many flocks were rescued?

“FLOCKS?!! There was one flock left in the nation in 1987.” Ken Whealy located the flock. There were around 5 hens and a cock or two. While they were severely inbred, they hatched alright at first. Ken began to select away from the aggressive cocks and in a few short years, fertility had dropped dramatically. When this happened, Ken gave the flock to Glenn Drowns to see what he could do with it. When Glenn received the flock, he said, “If I set 100 eggs, I’d have 10 that were fertile, and only 4 would hatch. They were in desperate need of help and new blood.”

Have you done any outcrossing to bring in new genetics and if so to what breeds?

“I’m 90% sure that the Iowa Blue was created through crossing a Silver Penciled Rock cock over a Silver Campine hen. I made this cross and then crossed the F1 to an Iowa Blue cock.” He said that the SP Rock x S Campine cross will produce a percentage of offspring that will look exactly like the original stock Ken rescued.

Additional Stories/Recollections from elders familiar with the stock?

There was once an older gentleman who was going to visit with me about what he remembered of the Iowa Blue while he worked at a hatchery that sold them when he was a kid. However, he passed away but a few short months before they were scheduled to get together!

Did they ever contain traditional blue dilution genes?

What do you remember the old birds looking like?

“The pictures in “Story’s Illustrated Guide” are what they should look like in color.”  (See photos below.)  In type, they were similar to RIRs. Brick shaped.

Glenn said the picture of the male in the Story’s Guide is lacking in size and smoothness, but it was all he had at the time.

What was the size of the original population of Iowa Blues?

Severely limited to Decorah and the NE part of Iowa. They were sold at a time in history when nearly every town had a small hatchery, and these hatcheries didn’t ship chicks regularly. Generally you went to the hatchery and picked up the chicks in person. Therefore it made the spread of new breeds a very slow process. By the time the 40’s came and the chicken industry became industrialized with specialized breeds, the Iowa Blue had only reached the outer parts of the North Eastern part of Iowa. “I seriously doubt any chicks hatched by the hatcheries reached beyond Iowa, save for the rare exceptions for SE Minnesota, SW Wisconsin, and NW Illinois.” If any made it beyond that limited area, it was most likely caused by private breeders. Only Iowan’s wanted to raise Iowa Blues.

How did the “old stock” differ from the present “purebred” stock being sold at hatcheries?

What was the overall goal for the breeding of the original Iowa Blue?

“They are a late 1800’s early 1900’s type farmyard chicken. This means, they aren’t super-efficient, they didn’t need to be.” Their value to the farm was not just limited to eggs and meat. They had to be able to fend for themselves most of the year, successfully raise a clutch of chicks to adulthood, and outsmart predators. Breeds like that were bred for so much more than to be egg/meat factories. That’s what makes them so unique. 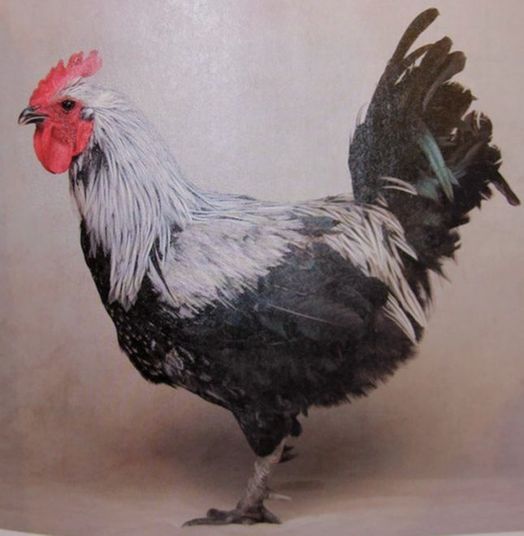 What would the ideal cock color be? Crow Wing/Duck Wing?

Doesn’t matter, the club should decide what they want.

How far down should the lacing go?

Down the chest and onto the underbelly.

Was there gold present in the hackle or saddle, or always silver?

“NEVER, that’s the surest sign they aren’t purebred.”  When introducing new blood from out-crossing to other breeds, one must make sure undesirable traits are bred out.  It’s best to outcross to breeds that resemble the breed you’re trying to save.  Stay with the Silver Penciled varieties if you want to maintain the traditional color type.  But no double lacing! 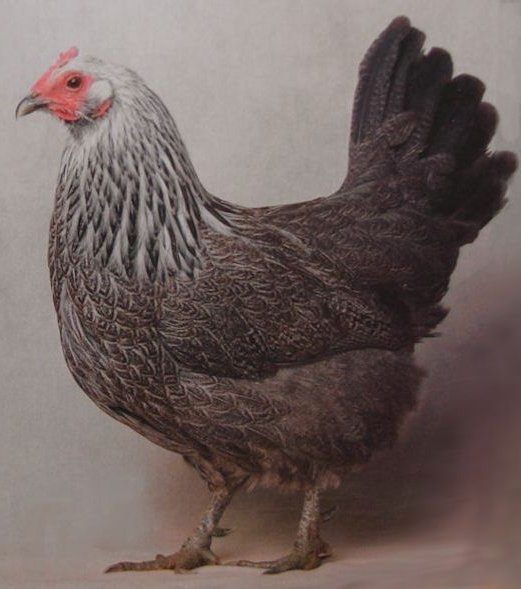 What would be the ideal color for the female?

“Like the Story’s Guide picture. She should have lacing on the front half, slowly transitioning into a stippling.”

What are the shortcomings you see in the current population?

Is there a preference as to which color is preferred? Silver or Birchen? Is so, which one and why?

“I’m a traditionalist, so I think they should be bred in their original color only. But, I think the birchen is here to stay. If you keep them (the birchen), I’d encourage the club to require lacing on the breast/underbelly on both cock and hen.”

What are your thoughts on birds possessing red feathers or carrying red genes?

“Crossbred birds. Never, never, never should red or anything close to red be present. No to gold, to cream, anything but silver.”
TYPE

“8lb cock/ 6lb hen would be ideal, but don’t know if it will ever happen.”

How many points on the comb:

“Never got to a point where I could be picky.”

“They always had nasty looking tails, including the original flock. I would like to see the tails improved some. I would encourage shorter, full tails over long leghorn like tails. Again I’m a traditionalist.”

What color of chick should we be selecting for?

“That light chocolate brown. Anything else will be off colored as an adult. If you get a whole hatch that is that color, I will personally come and visit your flock. That’s how hard it has been to produce the right color.”
OTHER INFORMATION

Do you have any photos of birds that are considered to be the appropriate type and color?

I have a couple of black and white photos I’ll send you copies of.

If you could write the Standard yourself, how do you see them appearing in a Standard? What necessities are absolutely requirements?


What is your impression of the 2-3 distinct type we are seeing in the breed now?

“Too many people have the wrong type and color of bird. How can a black bird be considered blue?”

Do you have any guidelines for what direction you would like to see the breed take?

“If I could pick one thing, I’d encourage the club to keep the original color.” If you want to add more colors, so be it. But if we lose the blue/grey hen, we lose the breed identity.

Do you have descriptions of Iowa Blues from old hatchery listings or any other source? Old magazines, etc.? If so, could you make copies of them for us?

I’ll send you copies of everything I have.

Are you aware of any older breeders that might have strains we should conserve? (There have been rumors about someone in Virginia with “old style” Iowa Blues but we have never been able to find that person)

“To my knowledge, none exist. I highly doubt the Virginia birds. Probably just a rumor. But, you never know.” Many of the people I sold chicks to in the early years are now dead. They wanted some Iowa Blues because they remembered having them when they were children, but once they passed away, their families got rid of the flocks.

Would you be willing to contact previous buyers to see if they’d be willing to get in touch with us and share their thoughts/experiences or sell stock, chicks, or eggs?

I sure will, it may not happen till next winter.  I’ll send anything I come across to you as soon as I can.
Special Note:

Iowa Blues are EXTREMELY susceptible to Laryngotracheitis! If you show them, you must vaccinate them for this! If you don’t, you will risk losing your whole flock. I learned this lesson the hard way and had to build them back up again.

Smith Poultry Supply has a nice vaccine for this. You put it in the water. Do not use the nasal spray, it often times damages the eye.