To accomplish spiral breeding, you will need at least 3 breeding pens and a bachelor pen along with grow out pens and at least 3 trios of birds of the variety you are working with. You will also need a detailed journal to keep your records, and the birds must always be identified with at least the pen they came out of and year of hatch. Wing bands can be used as a permanent marking from hatch, otherwise a toe punch system or zip ties may be used to identify the chicks from hatch. Incubate the eggs from different pens separately so that you know which chicks came from which pen. (Using staggered hatching or egg baskets or other means of keeping the chicks separate until they can be marked.)

The following is a toe punch numbering system that may be used. Good records are critical to maintain a properly rotating spiral system. The type of labeling isn't as important as the accuracy and record keeping of knowing what line each bird came from. 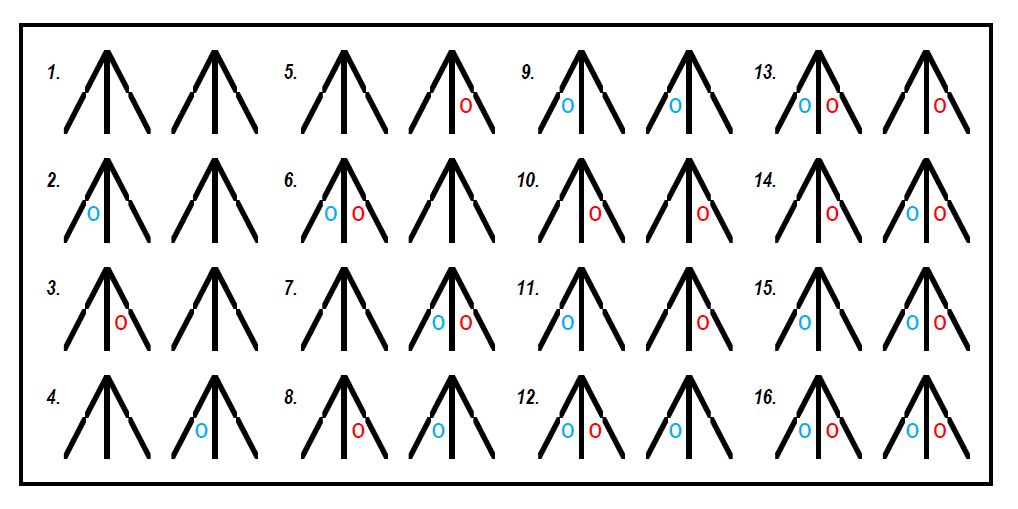 Standard Toe Punch Diagram, allowing for marking of up to 15 crosses, #1 being reserved for birds of unknown parentage.
Spiral Breeding Plan

Form 3 breeding trios. These will form your 3 lines. Label one pen Line A, the second pen Line B, and the third pen Line C.


Year One, make the following crosses:

This is the line breeding year, breeding males and females from the same pen.

In this breeding program, the daughters always stay with the pen that produced them while the males rotate to the next pen every other year. (A daughters stay in the A pen, and so on.)

Sons should be compared to their father and the best male selected for the next year's pairings. Keep the males in a bachelor pen, but tagged / marked with the line that produced them so that you can determine which males you are choosing from for each year's pairings.

This is the outcrossing year, breeding males cross over to the next pen's females.

At the end of year 2, all 2 year old birds are retired (the grandparents).

Year 3, the cycle is repeated. Choose the best A line male (from year 1 or 2) and breed to the A best A line females, line breeding for the year.

Carry on, line breeding for a year, then out crossing for a year. In this manner, the males move over a line every other year.


This is a very old system which has been used to keep enough genetic diversity in a closed line to prevent inbreeding depression. One family reportedly maintained a line of Rhode Island Reds for 90 years using this system with 5 matings each year.