Been a while since I talked to anyone about these.  I am very surprised! These girls look pretty darn good!   The roosters not bad either, but more shots would be helpful. Yes, I would like to see more pics of the roosters & chicks.

I remember some of the females were more of a very pretty 'silver" penciled color instead of the color on these females & actually would have made more sense naming them "Blue."  I always wondered if those were the ones that the chicks were darker & wanted to band those as chicks to follow that thought. Remember banding some birds, but do not think I came to any conclusion. Thought Iowa Silvers would have fit for those too, ha.  I don't remember if Glenn even noticed or if he had any thoughts on it.

I would be interested to know how these came to be. Were they from Glenn's birds he had mixed Egyptian Fayoumi blood in?  Or did someone still have a few pure ones?  These look more compact, more like the original bird then Glenn's that were too lanky & his were way to dark, especially the cocks.   Are they breeding true? I assume the eggs are brown?

Yeah, I think it is very wishful thinking on finding any. I had asked the "helpful" guy at the Decorah hatchery about it 8 or 10 years ago. He basically thinks they are a waste of time anyway. (By the way, it was the Decorah Hatchery who hatched the chicks we originally received & he did not think to much of them then either)   Talked to him about the same time I was sorta pressing Glenn if he knew of any old pure ones left.  At that time Ransome Bolson was still alive ... & he suggested I try him. I did not feel like pestering him, so that was that.  Anyone else I knew who defiantly had them no longer keep birds & had not passed on any to others.  I have been to Michael Moors farm outside Decorah a couple time and talked to him. ...  I know he has not had any since Kent got old "Herman" & hens from him prob. 20 years ago.

This July will be our 25th consecutive Seed Savers Exchange camp out "Conference."  So we have seen the unfolding of all of this and a lot more for a long time.  I still remember old "Herman" & his girls with their old scaly legs, but they were still beautiful.  We would camp in the valley there & in the early morning fog it was cool to hear that old bird crow.  I really wanted those birds bad!

In those days I spoke with several old poultry guys (Thane Earle was one), some would be at the camp out & really none of them thought to much about them & were pretty indifferent about whether the breed survived or not.

I have noticed a big difference in the different breeds I have kept over the years in the sound or the crow, and always liked theirs.

These were the first real flock of chickens I ever kept & prior to that had only a handful of bantams off and on since I was a kid.

So, I had just Iowa blues for maybe 3 or 4 years. Then I stupidly went nuts & got several other breed to work with.  Unfortunately, I introduced disease when I bought mature birds from others.  Something went through & birds were dropping like flies. It was very sad, disgusting & disheartening.

Glenn helped me through & I saved some birds.  I was down to only a few Iowa Blue hens & gave them to Glenn.  I think all he had left was a pure cock or so, no hens.

Anyway this was what he had left to work with & "kinda" saved them when he infused the other blood.  This has been 19 years ago I believe.

I never distributed birds to anyone other than Glenn.    If anyone has a record of a possible pure remnant it would be him from any he distributed prior to the different blood.  I would be completely shocked if there were any around from that time. … I asked him of this possibility several years ago & it seems he had a recollection of a remote chance.  I doubt he had time to pursue it. That was at least 8 - 10 plus... years ago.

I did find the pics of my birds & believe they are from the first chicks I received, at probably about a year old, not positive but pretty sure on this.  It could have been in the fall, too, though.  They are not the best pics, but better than nothing. I will try to get help from my daughters over the next few days to get copies to you.

Do you have any color shots of old "Herman"?

I think so, but as said that will be a long while before I can take the time to hunt that down.

The rooster looks a lot lankier than it should & I think the white/ silver mane drapes down too far across the back.  I noticed as the roosters aged the silver seemed to get a lot better looking & go further down the neck & over the shoulder , but not as far over as this one goes.  Kinda cool but not the same.  They also got a yellowish cast to the old cock’s mane & I don't think it was from being soiled / stained.  You will notice when I send the pics, because the rooster is younger the mane is not as far down.  Any idea how old these birds are?

I would cull those black hens!    There was never anything at all like that in any of the birds.  The brown chicks look a lot more like the ones I remember than Ideals , but still not as rich of a chocolate color.  At least to my eyes these look a little to "red" or too light.  There were always a few very dark chocolate almost black, chicks in a hatch , say.... 10% tops hard to remember.   The striping is a trait Ideal’s defiantly did not have. I was really bummed when we got those chicks.

If you recall some of the lore.... says perhaps crossed with a pheasant (Not really possible) from the striping in the chicks, that was very appealing about them too.

It would be difficult if I were doing it to cull all the black chicks. As said, there were some. I think I have color pics from the original chicks we got from the hatchery too, but those too will be challenge to find!   Don't think I took any pics of chicks I actually hatched.

Kinda thought some more about the last of my old hens I gave to Glen.  They were pretty old, as our youngest daughter who is almost 20 now, does still remember them when we were looking at them last night & she was pretty little. I could never kill them even though all they did was eat.  They must have been at least 8 years old & had not laid eggs for years. Glenn did manage to get a few out of the old girls though, or they would probably not have made it at all. He just had so much trouble with a good hatch in a incubator. I had really good success under a broody hen. They were very good moms too.

Unfortunately, then as now I did not have enough time to really do them justice & always felt bad about messing up with them.  We sure ate a LOT or Iowa Blue eggs, especially during the winter. I used to keep a light on late in the winter because I got home so late & did not want to spook them & gave them warm water.  So they laid pretty well in the winter.  Wish I could have those back now to hatch!

I don't know if Glenn told you but we lived in the middle of town in Rock Island when we had them.  Lived on a 3/4 acre lot.  We were fortunate, the neighbors loved them.  Remember panicking when all those roosters started in & sometimes late at night for no reason. Had to cull them down, which was fine. They were very aggressive & only kept the prime cocks.  They would attack, so they became a concern with our then small children. Some of the other breeds we kept were way less human aggressive. So that was another reason I became less enamored with them & got other breeds. Think we had over 50 assorted fowl when we lived in town!

This should make you happy !

Looking at these again, the cock’s mane is pretty far down, but different than Kari's. I think he is a little stockier too.  The pair pictured are from the original chicks I received & probably about a year to 15 months old.

The single hen was from some I raised & was one of the old ones I gave to Glenn.  She looks like the more silver color I think. 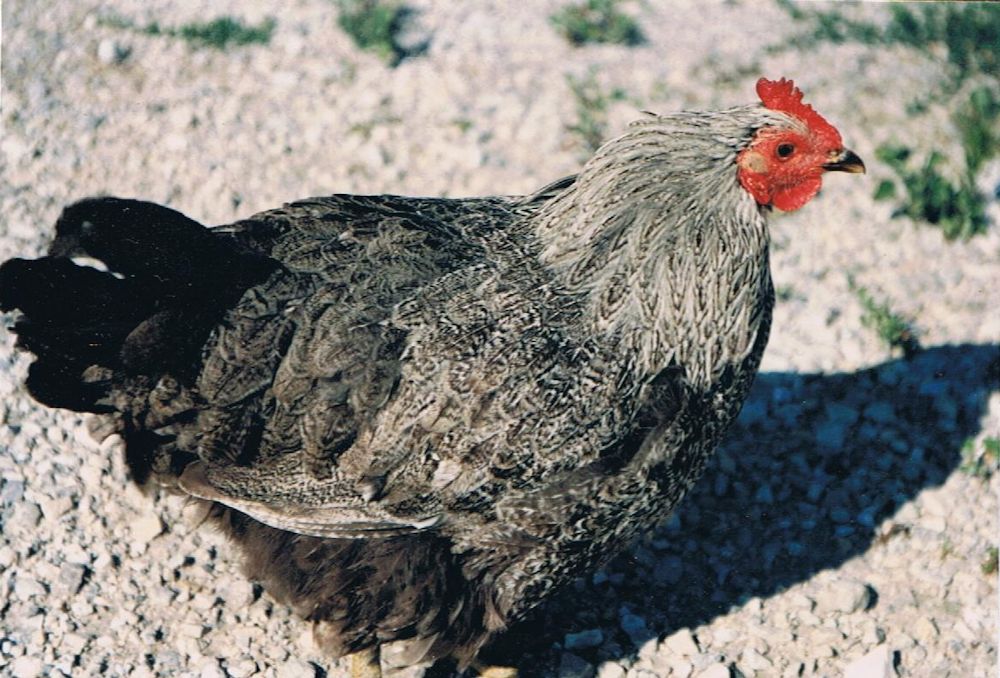