By The Associated Press

A new breed of chicken which began with a cross between a Chinese cock pheasant and Black Minorca and Rhode Island Red hes has been developed in northeast Iowa.

The present owner of the flock which was begun 25 years ago by John Logsdon of Decorah is W. C. Fenton of Strawberry Point. Fenton has named the new breed Iowa Blue because of its distinctive coloring and also to give the state of Iowa a chicken of its own.

The feathers of Iowa Blues are basically white but have a bluish-gray marking that closely resembles the markings of a hen pheasant. In most cases the heads of the birds are white while the feathers toward the tail have more markings.

The Iowa Blue is a heavy breed with cockerels reaching a weight of seven to eight pounds while the mature cokcs reach nine to 10 pounds.

Logsdon, in starting the new breed, selected the Black Minorca because that breed lays large eggs and the Rhode Island Red because he considers it the leading breed of its type. The pheasant was chosen because of its hardiness and ability to stand both cold and heat.

From the first mating of the cock pheasant and the two hens, Logsden raised eight birds – four pullets and four roosters.

The next year he mated what he regarded as the best rooster with the four hens and continued that in that manner, always keeping the roosters as long as possible and mating them with the previous year's pullets.

Fenton purchased the entire flock of Iowa Blues a year ago and now has four flocks of them.

Fenton says characteristics of the Iowa Blue include a large breast, dark legs and a brown egg. The chicks when first hatched are varied in color and may be red, brown, grey, or blue, but when they feather out they are all alike. 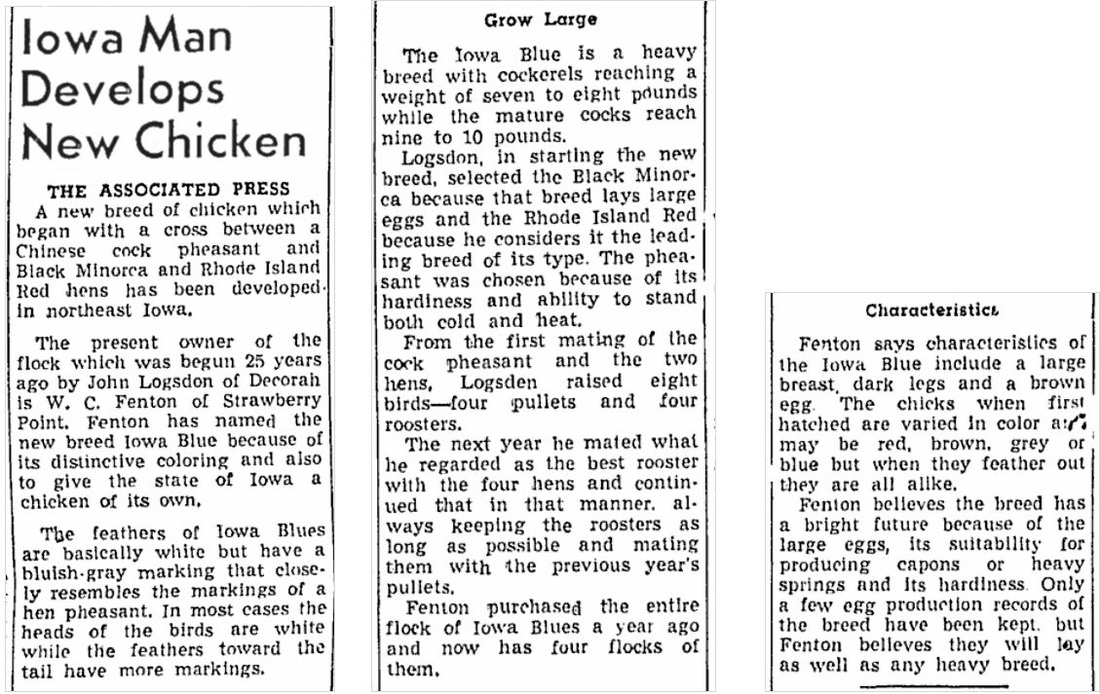