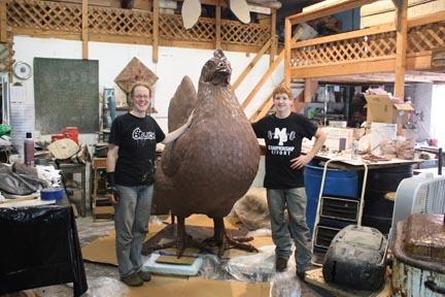 It’s not only a giant chicken, the clay model for a future bronze reincarnation at Coralville’s Iowa River Landing is of an Iowa Blue Chicken. Except for a limited number of Iowa poultry historians, that might not seem like a big deal – but it has excited the members of the Iowa Blue Chicken Club.

When the call went out for submission ideas for a sculpture park featuring the works of 11 Iowa artists, Amber O’Harrow had just the project in mind – the chicken.

Originally from California, she was an artist and private art instructor at Cambridge, UK, from 1991 to 2001 before following her career as an artist in France. She has shown works across the US and Europe and has pieces in a variety of permanent collections that include the Grassi Museum for Applied Arts in Leipzig, Germany, to the Coralville Performing Arts Center.

* Creating a clay model for a work of that size can normally take at least six months. But because of the application process and project deadline in September, said O’Harrow, she completed it in a month – working 11-12 hours a day, seven days a week. She had help with the armature from MaxCast. Her son Piers, she added, also helped, including with the feathering.

The mold of the clay model will be cut into sections for casting, with the bronze pieces then welded together to create the giant chicken.

But back to the chicken. The Iowa Blue originated in Decorah in the early 20th Century as a dual-purpose breed for both meat and eggs. Before the days of indoor factory chicken farms, the Iowa Blue was bred to be tolerant of both Iowa’s winters and summers, as well as good forgers and savvy in regard to predators.

Males are noted to be excellent flock guardians and are talented hawk fighters, according to the Iowa Blue Chicken Club.

“The Iowa Blue was developed in the early 1900’s near Decorah,” according to the Iowa Blue Chicken Club website.  “A folk legend tells the story of a white Plymouth Rock hen emerging from under a building with a clutch of chicks colored solid chestnut to striped.  Old-timers tell the tale that the chicks were sired by a pheasant.

“The breed was carried by several Iowa hatcheries through the 1960s, but was nearly lost when the hatcheries went out of business.  The breed was rescued from near extinction and has been bred and preserved through the efforts of a few breeders since the late 1980s.  The Iowa Blue grew in popularity in 2011 with a group of dedicated breeders working to preserve and return the breed to its original type and purpose.”

Coralville to Dedicate Sculptures in the Iowa River Landing
2013-10-15; The Daily Iowan